Joan Nathan asked a chef why he was making an old family recipe, and he answered, "it is not the taste I am searching for but the memories."
From Joan Nathan's upcoming cookbook King Solomon's Table. (affiliate link)

As I read this quote in Joan Nathan's cookbook, the words resonated with me and tears welled in my eyes. It hit me. I do it for the memories. I invite people into my kitchen to cook because it reminds me of the buzz in my mother's kitchen. Her kitchen was often filled with other women-- my sister, grandma, aunts, cousins-- all cooking together and sharing recipes. I remember a palpable feeling of togetherness as everyone collaborated and shared chit chat.

Last week there was a similar feeling in my kitchen when I hosted a cooking class with legendary cookbook author Joan Nathan. We gathered around my kitchen island. It felt like an intimate group of girlfriends hanging out, getting cooking tips and enjoying Joan's stories. Joan Nathan is a compelling storyteller, and the backstory to each recipe is fascinating. Joan has spent decades researching Jewish food history and collecting recipes from Jewish cooks around the world. 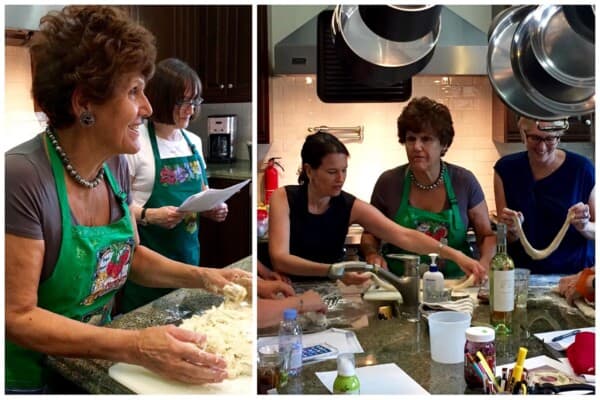 Joan Nathan and the cooking class in action.

So how did Joan Nathan end up in my kitchen? I met her at a culinary event earlier this year. We talked about the cooking class that she teaches in Washington, D.C. As we talked, one thing led to another, and next we arranged to do a cooking class at my house in Los Angeles.

For the cooking class, I selected recipes that have a new twist on High Holiday cooking. I wanted recipes that are different and would liven up my usual repertoire. Best of all, the recipes are not complicated and can be made ahead, which is perfect for holiday entertaining.

The cooking class menu with notes and recipe links: 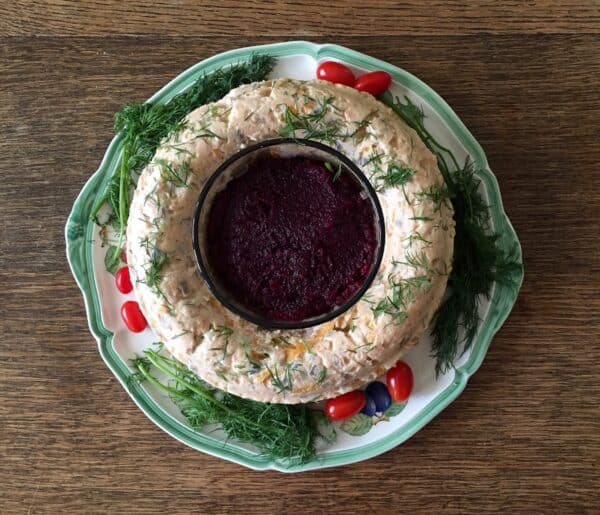 When I saw an elegant photo of Joan's gefilte fish made in a bundt pan, I knew it was time to learn how to make the real thing. As I suspected, Joan's homemade gefilte fish tastes nothing like those awful fish balls covered in gel from a jar. This homemade gefilte fish is tasty and surprisingly easy to make. One key factor is cooking with mild fish so that the dish is less fishy. Joan recommends using a combination of salmon and a white-colored flaky fish such as rockfish, whitefish, cod, or flounder. Select whatever mild fish you can find that is local and fresh.

Tip: Talk to your fish vendor in advance to see if they can grind the fish for you. I found out that in my area Santa Monica Seafood can grind any fish with advanced notice. And Gelson's Market has a ground fish blend specifically for gefilte fish that is available by advanced order. However, don't worry if the market cannot grind the fish. I ground the fish quickly and easily at home in a food processor. Next time I'll know to order in advance.

For the class I made the gefilte fish in two smaller six-cup ring molds (instead of one 12-cup bundt pan) so that they would fit in my smaller oven. The molds were my mother's, and Joan pointed out that she probably used them as Jello molds! Even a half recipe makes a good amount of food, so next time if I have 10 to 12 guests or less, I will just make a half recipe. 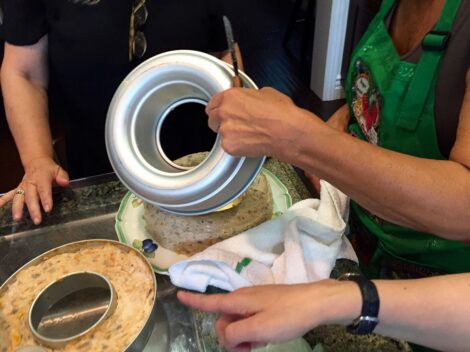 Making the gefilte fish with a vintage ring mold.

Joan has a tradition of serving gefilte fish for Rosh Hashanah lunch and for Passover seder. This is a handy dish when you need to pull something out of the refrigerator that is ready to eat, so I think it also works well for Break the Fast, sukkot, and shabbat. This recipe is made a day ahead or can even be frozen. 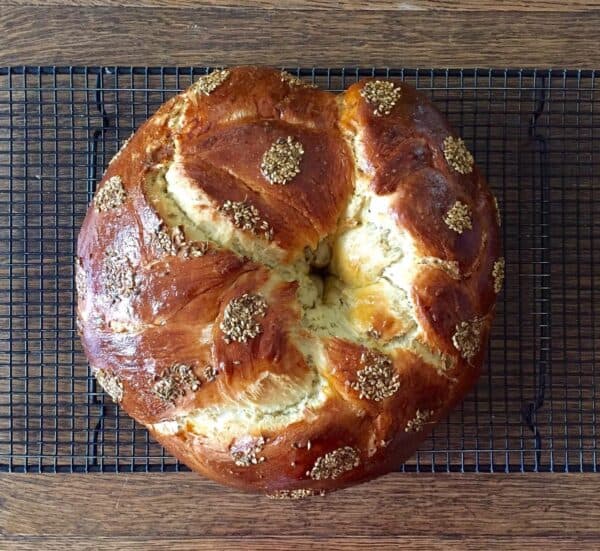 I was excited for the chance to learn challah baking from Joan Nathan. My previous efforts were a good start, but I needed more instruction. I also have friends who wanted to improve their challah game, so I knew they'd want to join me. Although Joan has many different challah recipes in her cookbooks, she recommended this recipe for the class. She was right. This recipe is miraculous. It only takes about an hour to make from start to finish because it is no rise and quick knead. Usually challah has two rise periods, but this bread is just as delicious without it. Also, this bread is wonderful with the added flavor of anise seeds. I never would have added the seeds on my own, but I'm glad Joan did because I really enjoyed it.

I bought the anise seeds at Eliat Market, a local Middle Eastern market. The seeds can be found at some regular groceries stores, Penzy's Spices, and Amazon too. Try to find a store with good turnover so that the anise is fresh. The brand I bought was Sadaf; however, that's just one of many good options. Make sure you buy seeds, not powder and not star anise.

And it gets better. Joan taught us how to make a six braid challah. I made this video during the class to help remember how to do it. As you can see, the braiding doesn't turn out perfectly, but the bread is still gorgeous. I love Joan's attitude in the kitchen: it doesn't have to be perfect. That's so freeing for an exacting person like me.

To make a six braid challah, remember the mantra: Outside over two, next to the last to the other side. 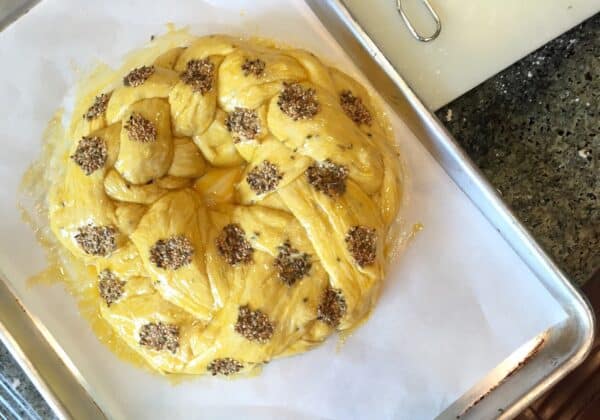 Round challah for Rosh Hashanah decorated with a circle pattern of seeds. This bread is ready for the oven.

Another great tip from Joan was a challah decorating technique. Instead of sprinkling on seeds to decorate a challah, she applies them in a pattern. She makes a mix of seeds (in this case sesame and anise) in a small bowl. After she braids the challah dough, she brushes it well with egg yolk. Next she applies the seeds by dipping a finger in the egg, followed by a dip into the seeds, and then touches the challah to transfer the seeds from her finger to the challah. The seeds placed by her finger make a small circle shape. Joan repeats this procedure of dipping her finger into the egg and seeds until she has touched all the crests (high points) in the challah braid. This method makes a cool pattern of circles on the challah. It's a nice extra touch that looks pretty.

Link to the challah recipe. 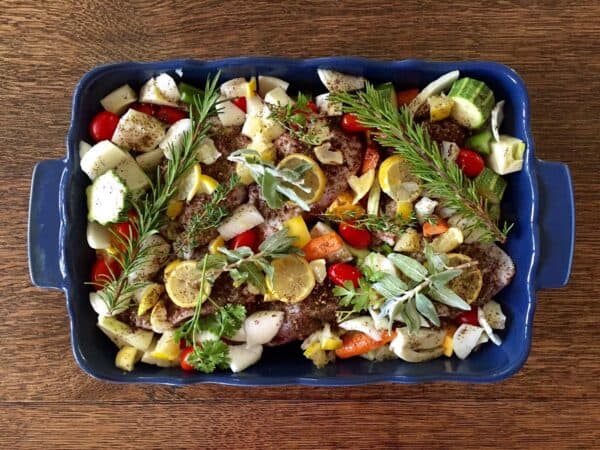 There are three things to love about this chicken recipe: 1) It's a one pot meal that can be prepped ahead. 2) It is filled with layers of flavor including preserved lemon, fresh herbs, seasonal vegetables, and Middle Eastern spices. 3) You can use whatever vegetables you like. For the class I chose butternut squash, carrots, celery, zucchini, onion, and cherry tomatoes. 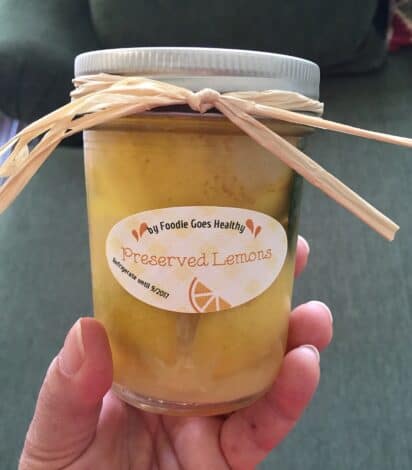 This chicken recipe is a gem from Joan Nathan's upcoming cookbook King Solomon's Table coming out April 4, 2017. The book is filled with gorgeous photos, fascinating stories, and her most up-to-date recipes. It's her best book yet. (Pssst- Amazon has a pre-publication sale price on the book).

Link to an earlier version of the Double Lemon Chicken recipe. To duplicate the recipe from the cooking class, add a generous sprinkle of za'atar spice blend and ground sumac to this recipe. We used the Sadaf spice brand in class and were happy with the results. The sourcing notes I gave for anise seeds in the challah section above also apply to buying these spices. 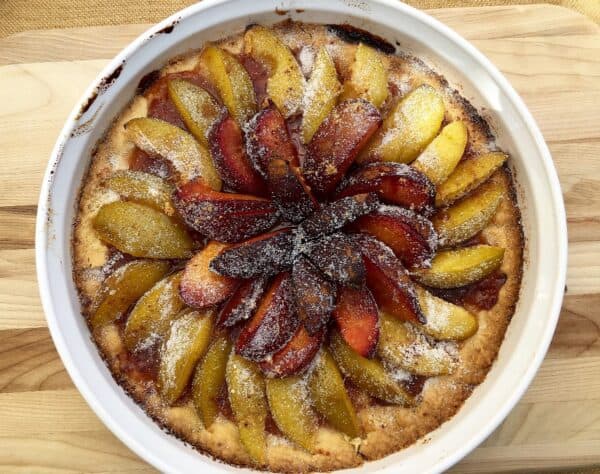 This tart crust is made without a rolling pin. You just pat the dough into the pan with your fingers. It felt like playing with play doh. Yes, it was that easy. 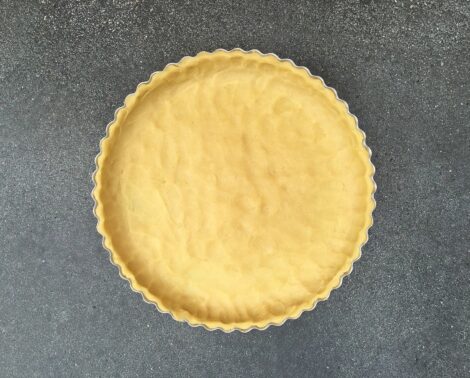 Here's what the tart dough looks like right before it goes in the oven.

This crust can be used with many kinds of fruit such as plums, peaches and apples. Furthermore, this tart freezes well. I want to take advantage and freeze some tarts made with the end of the season pluots which have been so wonderful this year. 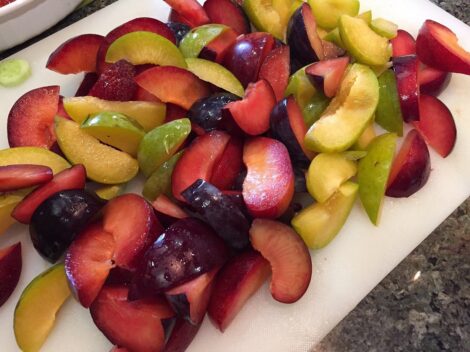 These gorgeous pluot colors are the inspiration for the three-color tart. These pluots are from Arnett Farms (at many Southern California farmers markets such as Mar Vista, Century City, Westwood, and Torrance). Using three colors of fruit gives the tart a fun twist. I learned from one of my local farmers that pluot skin is thinner and less bitter than the skin on most plums. These pluots were very sweet, so we sprinkled less sugar on them.

In addition, we made a second tart with Joan's favorite plum: Italian prune plum, which is only available a few weeks of the year. I was happy to find some at Gelson's Market. This version of the tart was equally delicious. The photo for this tart is in the collage at the top of the post.

Tip: My oven runs fast, so I lowered the temperature and reduced the amount of time cooking time during the crust parbake. The crust is reading for filling when it is golden brown. Do not let it get too dark. 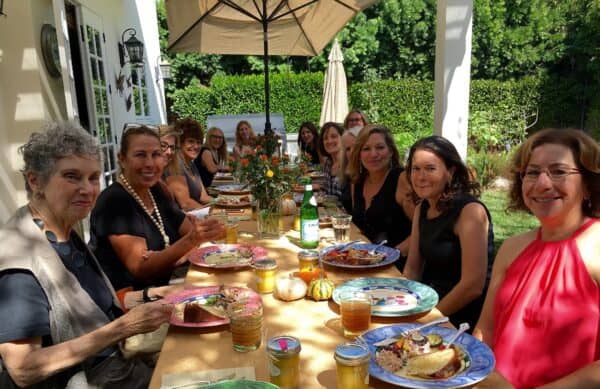 Having lunch in the garden was a beautiful way to end a memorable day. 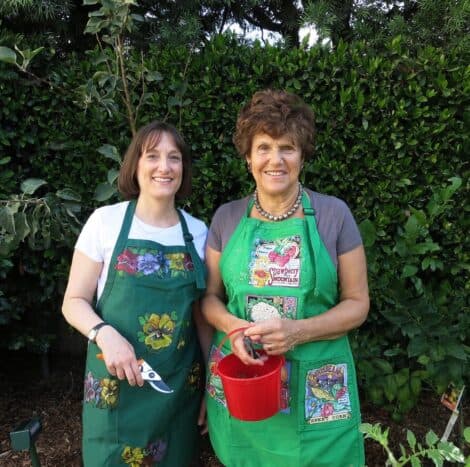 I enjoyed getting to know Joan Nathan. She is warm, personable, and down-to-earth. I'm thankful that she came to share her knowledge and stories with us. I look forward to making her dishes for this High Holiday season.

This post contains Amazon affiliate links. It does not cost you anything extra if you make a purchase through a link, and I will make a small commission. Thank you for supporting my blog.

« A Teenager's Guide to Positano, Italy: 5 Best Things To Do
Review of Joan Nathan's Cookbook: King Solomon's Table & Liven Up Your Passover with New Haroset Ideas »