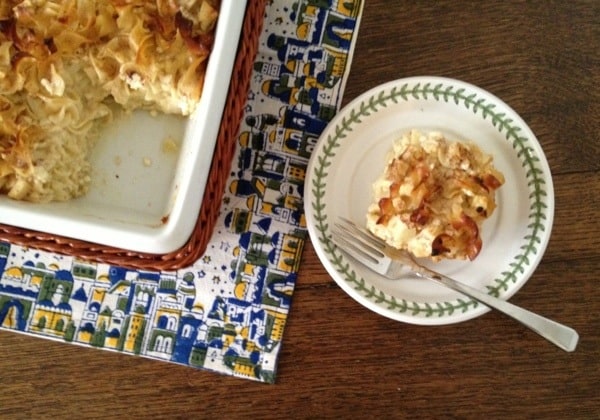 Every Jewish woman should have a noodle kugel, brisket, and matzo ball soup in her arsenal. These dishes go a long way toward filling the table with nostalgic, traditional holiday dishes. My mom and aunts all made the same noodle kugel recipe for the holidays. It was the star of the meal as far as I was concerned. I guess you could say my love affair with noodle kugel goes back to childhood. I like the sweet kugel, which is a dish of egg noodles coated in a luscious, sweet dairy sauce and held together by eggs. Kugel is comfort food at its best and a special holiday treat.

I never knew there were so many versions of noodle kugel until I saw my Aunt Clara's recipe file. She had over a dozen variations of sweet noodle kugel made with different dairy products (cottage cheese, sour cream, cream cheese, buttermilk, regular milk, cheese) and a range of mix-in's such as raisins, cinnamon, pineapple, lemon zest, mushrooms, onions, or spinach. Plus some recipes have a corn flake or graham cracker crumb topping, and others do not. My aunt may have had numerous versions, but there have been kugel contests with hundreds of recipe entries, according to Joan Nathan in her cookbook Jewish Cooking in America.

Now that's a lot of variations. 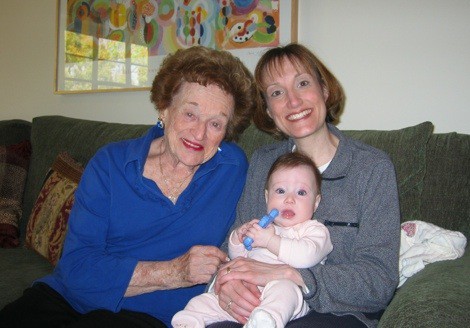 Aunt Clara with me and my older daughter when she was a baby.

When I was newly married, I sat in my Aunt Clara's kitchen collecting family recipes so I could carry on the tradition. Staring at so many recipe cards, I asked Clara for her advice about which kugel I should make. She suggested her favorite: Cousin Adele's kugel which is made with cream cheese and no mix-ins. The sweet cream cheese provides a wonderful, smooth texture and flavor around the noodles. This kugel recipe was my favorite for a long time.

Over the years I have made other kugel recipes, and they each have spent some time as my current favorite. The recipes vary in specific ingredients and in ratios. Nevertheless, all of these recipes are winners. To me the prototype of noddle kugel is my cousin Deanna's recipe because this is the recipe I grew up with. Deanna, being the oldest female cousin, is the keeper of the treasured family recipes. Deanna's recipe uses sour cream and cottage cheese as the dairy ingredients. 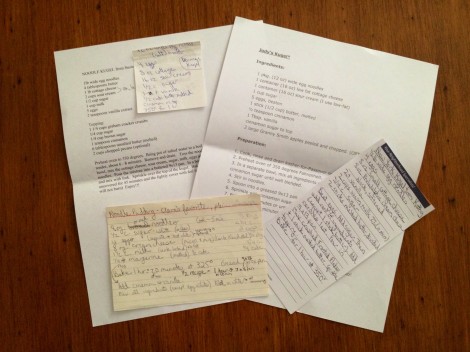 Each new recipe I fell in love with seemed to build upon the one before. My friend Susie's recipe is very similar to Deanna's, but the ratios are different, and her kugel has more liquid and thus, is more moist. Next came my friend Jody's sweet apple noodle kugel, and this kugel made quite a stir at the nursery school. All the moms asked for the recipe, and Jody's kugel was requested at every parent event. Jody's kugel is similar to Susie's, but there is an addition of chopped apples, which makes the kugel divine.

Then the New York kugel entered my life. My sister Kathy made it for me, and she got the recipe from a friend in New York, hence the moniker. The New York kugel is made with cream cheese and cottage cheese. This kugel combines the best features of all the previous recipes. But I couldn't just stop there. I have adapted the New York kugel recipe to add in my beloved apples, and I tinkered with the ingredients. Also, I took off the corn flake topping, which probably will horrify my sister and nephew who love the topping. I'm just a purist when it comes to noodle kugel. So without further ado, here is my ultimate sweet apple noodle kugel: 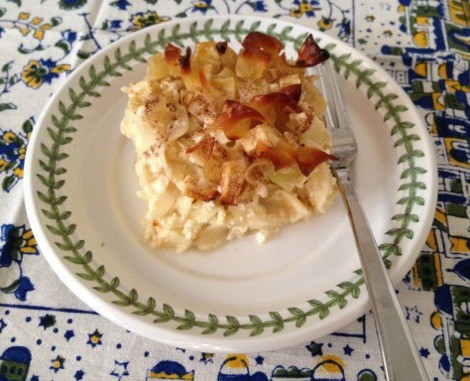 Recipe type: Side dish, dairy, vegetarian
Cuisine: Jewish
Author: Dana @ FoodieGoesHealthy.com
Prep time: 20 mins
Cook time: 1 hour
Total time: 1 hour 20 mins
Serves: 16
Ingredients:
Instructions:
Notes:
Passover tip from my friend Jody: this recipe works well with Manischewitz Passover Gold Wide Noodles (Not the gluten free or yolk free). Kugel can be made ahead: Option 1: Assemble and refrigerate overnight. The next day leave out for a half hour, then bake. Option 2: Assemble and underbake (cook about 45 minutes). Let cool and then refrigerate. Before serving warm in the oven for 30 minutes.
3.2.1682
This post contains affiliate links.

I'd love to hear your thoughts about my story and recipe, so please leave me a comment below. Thanks, Dana