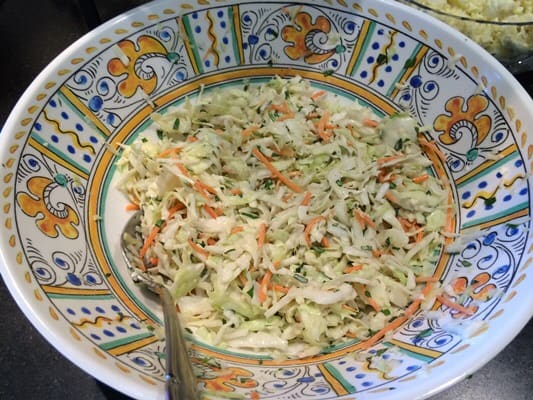 My sister asked me to make coleslaw to accompany the menu that she was making for a family meal. That's the nice thing about gatherings with my family-- people help with the cooking and the dishes, which makes hosting much easier. I had never made coleslaw before, but I felt confident because I had my grandma's famous recipe filed away. When I checked my file box, I found this recipe card (in my sister's handwriting): 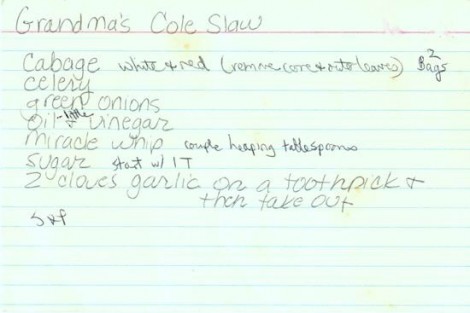 Oops, not exactly a whole recipe. Many of my family recipes are a list of ingredients with no measurements and no instructions. My grandma made this recipe by eyeballing it, so she had no measurements. She was famous within the extended family for making her coleslaw, and people would request that she bring it to potluck parties. I knew I had a winning recipe on my hands if I could just get some guidance on the proportions.

I did some Internet research and decided to use Kenji Lopez-Alt's recipe as a guide. I love the science that Kenji puts into all his recipes at The Food Lab. Kenji feels that coleslaw gets soggy from water seeping out of the cabbage over time. He has this method of pre-salting the cabbage to leach out water, and then rinses off the excess salt. Well, I tried this method, and it came out too salty. I didn't do everything exactly as he said, so I'm not going to blame his recipe. Luckily, I bought an extra bag of cabbage, so I just started over and didn't pre-salt the second time. Also, Kenji freshly slices cabbage, which probably has more water than pre-sliced, bagged cabbage. In this instance, it was helpful that the bagged cabbage was a little dry.

I used Kenji's dressing measurements as a guide and adjusted from there. I think it's helpful to dress the cabbage about 2 hours before serving and then the cabbage softens slightly. Everyone was pleased with how the coleslaw came out. It was a delicious topping for sandwiches. And by the end of the party, the coleslaw did not turn soggy.

Recipe type: Salad
Cuisine: American
Author: Dana @ FoodieGoesHealthy.com
Prep time: 10 mins
Cook time: 1 hour
Total time: 1 hour 10 mins
Serves: 8 servings
Recipe adapted from my grandma and from The Food Lab.
Note on the mayonnaise: I used soy-free Vegenaise because that's what I keep in my refrigerator. My grandma used Miracle Whip. She felt that it was her secret ingredient that gave her coleslaw its acclaimed flavor.
Ingredients:
For the dressing
Instructions:
3.2.2925
Post Script from my sister (Everyone in my family has an opinion.): She liked the coleslaw that I made and thought that the guests did as well. She said that there are different style coleslaws and that she prefers a more creamy style. Thus, she would add another dollop of mayonnaise. So to me extra dressing is soupy and to her it is creamy. Also, she prefers coleslaw with extra zing. So, she would use distilled white vinegar instead of apple cider vinegar and would eliminate the Dijon. Also, her handwritten copy of Grandma's coleslaw recipe varies slightly from mine (hummm). My sister feels that she has a handle on our Grandma's recipe because she has been making it for a while, so I'm sure my sister's suggestions are good. Well, looks like coleslaw is a flexible recipe, so either way, it's going to be a good coleslaw.