This post was originally published in 2012 and has been updated to add new photos and recipe tips.

This copycat recipe for Apple Pan’s Hickory burger sauce takes hamburgers to the next level. The special BBQ sauce adds a smoky, sweet, and tangy flavor that is irresistible.

The Apple Pan is a legendary burger joint in West Los Angeles. It has a cult-like following and is busy all hours of the day and night. The place looks exactly the same as it did when it opened in 1947, including its cottage exterior. It's a blast back in time with its counter-only seating, red leather stools, open kitchen with flat-top griddle, and waiters with paper hats. Popular menu items include the hickory burger, steak burger, tuna salad sandwich, and apple pie.

Why You'll Love This Recipe

Dana's note: What I love about The Apple Pan is that it is a piece of LA history, and many people have their own personal stories to tell. I remember going to Apple Pan with my parents and sister when we were kids. Now my sister and I take our kids.

My dad loved Apple Pan, and he had a funny story he told about it. He claimed that one time when he arrived at the Apple Pan, his good friend Jerry was already there eating, but Jerry did not notice that my father had walked in. Jerry was a big practical joker, and my father liked to reciprocate. The story goes that Jerry was holding up his hamburger, and that my father walked up behind Jerry's counter stool, leaned over his shoulder and surprised him by taking a bite of his hamburger. There are doubters, but my father swore that this is a true story.

Apple Pan has the best burgers, and my favorite menu item is the hickory burger. Their special secret sauce is the best sauce I have ever had on a burger. It's a unique cross between a barbecue sauce and tomato puree, and there's nothing like it in the supermarket. I tried to ask the Apple Pan employees for the recipe, but I had no luck.  I learned that every Apple Pan employee has to sign a confidentiality agreement and cannot reveal any recipes. This sauce is a well-kept secret. So, I decided to try to duplicate their sauce at home.

One taste of the hickory burger, and it's evident that there's a hickory flavor and some sort of tomato sauce. Early on I decided the recipe includes liquid smoke and chili sauce, so I used that in my copycat version.

Then one day I happened to taste one more Apple Pan hickory burger and discovered an unexpected secret. My friend brought me a "to-go" burger with the sauce on the side. I tasted the burger and the sauce separately for the first time. Much to my surprise, the hickory flavor appears to be in the meat of the burger, not in the sauce. What a shocking revelation. For decades I always thought of the sauce as being a hickory sauce, but it's not. The meat most likely contains liquid smoke giving it that hickory smoked flavor.

See the recipe card below for a complete ingredient list and measurements.

This burger sauce recipe only needs 3 simple ingredients. Because this is such a simple recipe, I don’t recommend changing up the ingredients too much, or you won’t get that original hickory burger taste.

See the recipe card below for complete directions.

Combine all ingredients in a small bowl. Add it to hamburgers, sliders, veggie burgers, BBQ chicken, ribs, or anything else you want to give a smoky, tangy kick.

How to make your own Apple Pan Hickory Burger

Apple Pan’s hickory burger is still served like it was originally in 1947. Here’s what you will need to make your own Apple Pan burger.

Make Ahead and Storage

You can make this sauce a few days in advance. Store hickory sauce in an airtight container in the fridge for up to a week.

I like to put my hickory sauce on sliders (mini beef hamburgers). Lately, we have been getting grass-fed ground beef from the farmers' markets. The grass-fed beef tastes "cleaner" than regular beef. It is more flavorful without being greasy or fatty. This meat only needs a little salt and pepper before it's grilled, and makes the best hamburgers.

It's fun to serve the sliders with a toppings bar. My favorite toppings are hickory sauce, sautéed onions, avocado and shredded lettuce. My condiment bar also includes ketchup, yellow mustard, and Dijon mustard.

What to Serve with a Hickory Burger

In addition to burgers, Apple Pan also has amazing pies. I especially like their apple, chocolate, and banana cream pies. A slice of pie would go great with these burgers. Here are some other burger side dishes:

Have you ever been to the iconic restaurant The Apple Pan in West LA? If so, comment below and tell me how you liked it! 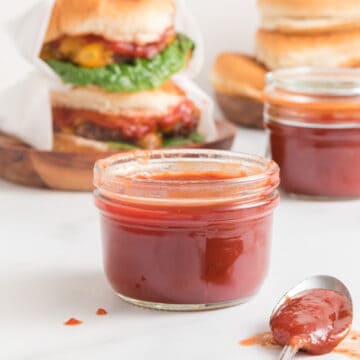 You can make this sauce a few days in advance. Store hickory sauce in an airtight container in the fridge for up to a week.