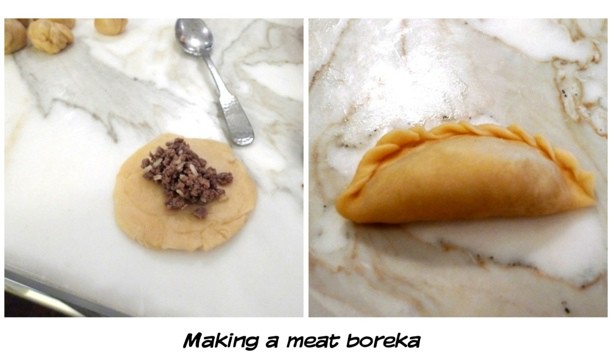 Sometimes you meet someone and feel an instant connection. This phenomenon happened to me recently when I met Robert. He talked about his love of cooking and about his most recent undertaking, making borekas, pockets of dough with tasty fillings. I too had been busy in my kitchen making a similar dish, kreplach, which also entails lots of dough folding. I admire the enthusiasm and skill that Robert has at his age. Robert is 12 years old and is my friend's son. So, a kindred spirit in the kitchen can be of any age.

Robert agreed to share his borekas recipe and photos. I'm happy he did because I love to eat borekas (also spelled bourekas) as an appetizer or snack. The dough is similar to a flaky pie crust-- yum! I like that the dough is baked, so it's healthier than a deep-fried appetizer and just as delicious. Robert's borekas are filled with ground meat, but borekas can also be filled with cheese or potatoes. Borekas can be assembled ahead of time and kept in the refrigerator or freezer until you are ready to bake and serve.

Making borekas is a family affair at Robert's house.

Here's what Robert has to say about borekas:
I grew up eating borekas, a traditional dish of my Sephardic Jewish ancestors. A long time ago my family left Spain and fled to Istanbul, Turkey and Rhodes, Greece. Rhodes had a thriving Jewish community and a delicious cuisine. My great grandmother was from Rhodes, and now there is a huge community of "Rhodesli" in Los Angeles. I got the boreka meat filling recipe from my grandmother, who taught me how to make borekas. I got the recipe for the dough from a website called the Boreka Diary. The site has a video that does a good job of showing you how to make the decorative edge on the dough. 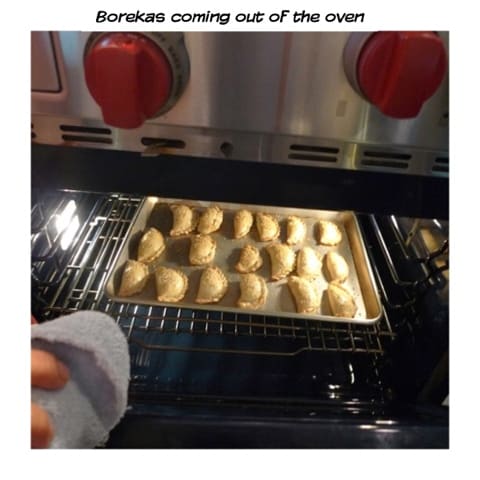 Ingredients for the meat filling:
Vegetable oil for sautéing meat and onions (about 2 tablespoons)
Half of a medium sized onion, chopped
1-½ pounds of ground beef
Salt and pepper to taste
½ tablespoon of Paprika (optional)
⅓ cup of room temperature water
2 tablespoons of lemon juice
⅓ of a cup of cooked white rice
1 egg

Ingredients for the dough:
4 cups of all purpose baking flour
2 teaspoons of salt
¾ cup of vegetable oil
1 cup of ice water
1 egg, beaten and mixed with 2 tablespoons of water (to brush on pastries before they go into the oven)
Sesame seeds for sprinkling on the tops of the borekas (optional)

Directions:
1. TO PREPARE THE FILLING: Begin by heating oil in a sauté pan. Next, add onion and brown until soft. After browning the onion, add the meat, salt, pepper, and paprika (if using). Break the meat up into small pieces and sauté until meat is no longer pink. Then, add water and lemon juice and simmer for 10 minutes. Let the filling cool down, then stir in the rice, and beat in one egg.

2. Preheat the oven to 400 degrees F. Take out 2 large baking sheets and line them with parchment or silpat liners (optional).

3. TO PREPARE THE DOUGH: (Note that the dough is very oily to create a flaky crust.) Add the flour and salt into a mixing bowl. In a separate bowl, whisk together the oil and water. Now gradually add in the oil and water mixture to the flour. Using your hands, mix together until the texture is rough. Do not worry if the dough is too rough and is not coming together; just add a little more water to the dough if it is not successful. Begin kneading the dough until it is smooth enough to work with. The dough has to be kneaded VERY thoroughly. The dough should be pliable and not too sticky.

4. TO FILL AND ASSEMBLE THE BOREKAS: Portion out the dough into about 36 medium sized balls. Using a rolling pin, flatten the balls into medium sized circles. Once the balls have been rolled out, place a small spoonful of the filling in the center of each circle. After this, fold over the edge of the pastry to cover the filling (they should look like thick crescents). Now pinch and pull the edges of the pastry to create a decorative edge, that looks like a rope or scallop. Alternatively, the borekas can be sealed shut by pressing the edges closed with the tines of a fork. Repeat these steps for the rest of the borekas placing them on a baking sheet as you go along. Once all of the borekas have been assembled, brush the tops with the beaten egg, and garnish with sesame seeds (optional).

5. To bake the borekas, put them in the oven at 400 degrees F for 25 minutes or until golden brown. Serve warm.